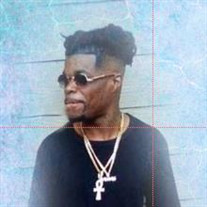 A. G. Johnson, Jr. was born April 20, 1989, in Memphis, Tennessee, to Maschelle Hamilton and A. G. Johnson, Sr. He was loved by a host of family members and friends. A. G. Johnson, Jr., leaves to cherish his memory: three daughters whom he... View Obituary & Service Information

The family of AG Johnson-Moss created this Life Tributes page to make it easy to share your memories.

Send flowers to the Johnson-Moss family.