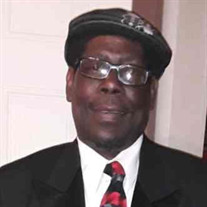 Mr. Anderson “A.D.” Davis, son of the late Eugene Clarence Davis and Essie Dean McShan, was born October 1, 1962, in Forrest City, Arkansas. Anderson accepted Christ at an early age after joining Pilgrim Rest Baptist Church in Whitmore, Arkansas. He attended Forrest City High School and shortly thereafter, relocated to Memphis, Tennessee. Anderson enrolled in Memphis Area Votech where he obtained his G.E.D. and received certifications as a Forklift Operator and an Auto Mechanic Technician. In 1985, Anderson met the love of his life, Carolyn. In 1987, they united in holy matrimony. Within this union, two families were blended with love. Anderson was a jack-of-all-trades and had a great passion for helping others and hobbies of landscaping, cooking, dancing, and just having fun. As a major sports fan, you couldn’t tell him anything about the Green Bay Packers; a true Cheese Head he was! He was very giving and always willing to help anyone that he could. A father-figure to many, he was known as “Pops” plenty. He was employed by Newbreed for fifteen years but later went on to retire from Flextronics in 2019. While in Memphis, he joined Greater Open Door Missionary Baptist Church under the leadership of Rev. Ricky Bell, where he was a dedicated member and served faithfully as an usher until his health began to fail. Anderson quietly departed this life Tuesday, June 8, 2021, surrounded by family in his adopted hometown of Memphis. He was preceded in death by his sister, Evelyn McShan. He leaves to cherish his memories, his wife of thirty-seven years, Carolyn Davis; one son, Marcus (Kimberly) Williams of Memphis, Tennessee; two daughters, Shunna (Darnell) Rucker of West Memphis, Arkansas, and Lola Brown of Memphis, Tennessee; one sister, Clara (Ricky) Brown of Dallas, Texas; one brother, Edward McShan of Memphis, Tennessee; two sisters-in-law, Deborah Webb and Ruby Thomas, both of Memphis, Tennessee; one brother-in-law, Rodell Jarmon of Memphis, Tennessee; fourteen grandchildren, four great-grandchildren, a host of devoted nieces, nephews, and cousins and two very special friends/brothers, Alfonso (Naomi) Neely of Memphis, Tennessee, and Keith Schaeffer of Indianapolis, Indiana.

The family of Anderson Davis created this Life Tributes page to make it easy to share your memories.

Send flowers to the Davis family.