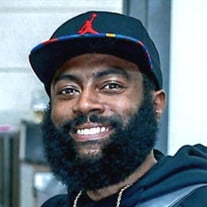 A – His Arrival: What joy as God blessed Whitman and Gwendolyn W. Able with a precious son, Anthony Maurice Able, born August 29, 1984. The wonder and delight his brother, Eric, found in the birth of his little brother. N – His New Birth: Anthony accepted Jesus Christ as his personal Savior in October 1997 under the leadership of Dr. Rev. C. Saulsberry, Sr. of New Nonconnah M. B. Church. His new converts class orientation was completed on October 26, 1997. He attended Worship, Sunday School, Baptist Training Union, and served on the Junior Usher Board. T – His Tendencies: “Amp” (as we often called him) had a soft side when it came to the love he had for his nephew, Elijah. Presenting him with gifts and allowing Elijah to play with his dog, Cain, and Poncho (the pot-bellied pig) would give Anthony the greatest joy. Anthony had a serious side as he filed an EEOC against a former employer, as well as standing his grounds against police intimidations. His explanation was “I know my rights!”. H – His Hobbies: Anthony has always loved God’s creatures…having pets from gerbils, turtles, dogs, snakes, a pig, and exotic fish. He had great joy in restoring the 1980 Pontiac given to him at age sixteen. Not to mention how he loved to grill, to cook, and even to grow some of his own spices. O – His Occupation: A true mechanic…knowing what his goals were early in life. He graduated from Vatterott Career College in 2011 with an associate degree as a diesel mechanic. Anthony started his own business in 2012 as “Able’s Towing and Auto Repair”. He was recently employed as a mechanic at The Hub Automotive and said this was the best job he ever had. His interest and skills in auto mechanics were nurtured by his late uncle, Freddie Williams, Junior. N – His Name: The name Anthony from various countries means the priceless one, Gift of God, very handsome and cute, and the best gift from Heaven. Maurice means mature and star of the deep blue sea. He was awarded certificates as superior reader at Crump Elementary, running track and playing in the band at Kirby Middle School. Y – His Youth and Years: Our beloved was 37 years young. Anthony was very knowledgeable, not only in auto mechanics, but in politics, in sports, in cooking, in religion…always yearning to learn more. He stated when he makes it to Heaven, he has a lot of questions to ask God. Anthony yielded to the Almighty and surrendered to the will of God on October 12, 2021. The loving memories of Anthony will be cherished by his parents, Whitman and Gwendolyn W. Able; brother, Eric J. Able; nephew, Elijah J. Able; two uncles, Aldred E. Williams, Sr. and Rufus W. Williams (Carolyn); three aunts, Joyce W. Keys, Dorothy W. Turner, and Dian W. Brown (Albert, Jr.); play-brother, Peshone Nelms; play-sister, Meika Reaves; neighbor, Mrs. Esther L. Isom; many cousins, other relatives, and friends.

A &#8211; His Arrival: What joy as God blessed Whitman and Gwendolyn W. Able with a precious son, Anthony Maurice Able, born August 29, 1984. The wonder and delight his brother, Eric, found in the birth of his little brother. N &#8211; His... View Obituary & Service Information

The family of Anthony Maurice Able created this Life Tributes page to make it easy to share your memories.

A – His Arrival: What joy as God blessed Whitman and Gwendolyn...

Send flowers to the Able family.