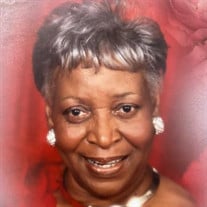 Mrs. Bobbie Jean Washington was born December 20, 1935, in Memphis, Tennessee, to James Henry Beauregard Sr. and Lillian Mason and was raised by her custodial parents, Thomas and Aline Murray; all preceded her in death. She was the third child of four, the late James Beauregard Jr., Alford Beauregard and Lillian Brisco. Bobbie accepted Christ at an early age at St. Peter Missionary Baptist Church under Rev. Howard Perry and later became a member of Mt. Pisgah Missionary Baptist Church until she slipped away quietly Saturday, February 5, 2022, at Methodist Central Hospital. She was affectionately known in the neighborhood as “Ms. Nesbitt” to all; she was a member of the Golden Girls and worked diligently for neighborhood improvements. She graduated from Hamilton High School on June 3, 1949, and united in holy matrimony to Mr. Lee Washington in June 1977; he preceded her in death on April 1, 2006. She was employed by Baptist Memorial Hospital for over thirty-five years, and after her retirement, she became a Foster Grandparent with Porter Leath at LeBonheur Hospital. Although God called her home, she left us with a lifetime of good memories, wisdom and love. She will forever be remembered by her surviving family, Rita Nesbitt, Tommie Poindexter (Fred), Daniel Nesbitt (Pat Sonia), Steven Nesbitt (Tonya) of South Carolina, and Valerie Malone; twelve grandchildren, Christy Bobo, Derek Bobo, Daniel Nesbitt Jr., Lloyd Carr III (Tenika), Devin Brown (Kim), Aujourd’Hui Johnson (Mose), Jasmine Nesbitt, Vernard Malone, RaSheila Nesbitt, Roslyn Jackson, Briana Jackson, and Vereon Malone and a host of great-grandchildren, nieces, nephews, cousins and friends. She was also preceded in death by her oldest son, McKinley Nesbitt, and her grandson, Damien Nesbitt. Kenny, welcome Momma in – although she’ll probably tell you, “Just Open The Door – I’ll Get It Myself!”

Mrs. Bobbie Jean Washington was born December 20, 1935, in Memphis, Tennessee, to James Henry Beauregard Sr. and Lillian Mason and was raised by her custodial parents, Thomas and Aline Murray; all preceded her in death. She was the third child... View Obituary & Service Information

The family of Bobbie Washington created this Life Tributes page to make it easy to share your memories.

Send flowers to the Washington family.