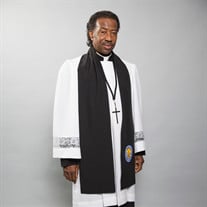 Superintendent Dudley Lewellen, Jr., was born on March 21, 1947, in Marshall County, Mississippi. He was the eldest of three children, two sons and one daughter, born to Dudley Lewellen, Sr., and Dora Lee Colman, who have preceded him in death.... View Obituary & Service Information

The family of Supt. Dudley Lewellen Jr. created this Life Tributes page to make it easy to share your memories.

Send flowers to the Lewellen family.