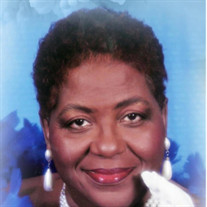 Mrs. Earnestine Downey Primes Robinson was born January 27, 1940, in Memphis, Tennessee, to the late Leona Jeter and Earnest Downey. She accepted Christ at an early age and was baptized. She later became a member of Monumental Baptist Church under the leadership of the late Rev. Samuel B. Kyles. She was a 1958 graduate of Booker T. Washington High School in Memphis, Tennessee, and she attended Owen College. She immediately began her career with Memphis City Schools and retired after over thirty years of service. Earnestine was united in holy matrimony to Mr. James F. Robinson, who preceded her in death in 2020. She was also preceded in death by four sisters, Malissa Johnson, Katie M. Lewis, Clentine Jones and Debra Anderson; one brother, William E. Downey; and her son-in-law, Melvin Isby. Earnestine loved the Lord and was a firm believer in prayer. She was an excellent cook, and one of her greatest joys was to be surrounded by her family and friends enjoying a wonderful meal and laughter. As her health began to fail and her mobility ceased, she required extra care. There was a loving and caring team of dedicated caregivers to serve her. The team consisted of her amazing children, her niece/god-daughter, her daughters-in-law, sister, grandchildren and so many others. On January 13, 2021, her life’s journey peacefully came to an end. She entered into eternal rest surrounded by her family. The Lord welcomed her home and said, “Well done, thy good and faithful servant.” She was a rare treasure and precious matriarch of her family. She leaves an extraordinary legacy. Left to cherish her memories are: her daughter, Stevelyn Primes Isby (the late, Melvin); two sons, Raymond Primes, Sr. (Monica) and Lawrence Primes, Jr. (Vernice); one sister, Ms. Sammie L. Downey; two brothers, Mr. Robert Downey (Joyce) and Mr. Leroy Downey; one sister-in-law, Geraldine Seawood Downey; a very special niece/god-daughter and caregiver, Tamicka Jones; eleven grandchildren, seventeen great-grandchildren, and a host of other relatives and friends.

Mrs. Earnestine Downey Primes Robinson was born January 27, 1940, in Memphis, Tennessee, to the late Leona Jeter and Earnest Downey. She accepted Christ at an early age and was baptized. She later became a member of Monumental Baptist Church... View Obituary & Service Information

The family of Earnestine Primes created this Life Tributes page to make it easy to share your memories.

Send flowers to the Primes family.