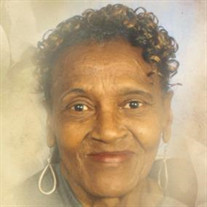 Irma Lee Grice was born August 9, 1929, in Memphis, Tennessee, to the late Allen and Effie McGown Grice. Irma accepted Christ at an early age at Martin Temple CME Church. In her later life, she joined Second Baptist Church under the leadership of Pastor Karl Berry. She was a faithful member until her health failed. Irma attended Florida Street School and was a graduate of Booker T. Washington High School here in Memphis. Irma worked for years in the cleaners industry. She worked for Happy Day Laundry and Cleaners on Union Avenue until her health failed. Irma was the sixth child of the eleven Grice kids. She loved her family, and she was the life of the party wherever she went. Even though Irma wasn't the baby of the siblings, her three younger sisters always watched out for her and babied her. To the nieces and nephews, Irma was the fun aunt. She allowed us to have much fun when she took us places or kept us. She wasn't the fussing aunt, but as kids, we knew not to disrespect nor embarrass her. She had a side that would put us in our place really quick. She attended many family reunions. Everybody loved her “Irmaology” and her sense of humor. Irmaology was her special way of explaining life to the young and old, and the rich and poor. She spared no one. Irma also had her own style of fashion. In the 70's, she often wore wigs, big earrings, and tasseled jeans, shorts, pants and shirts. Irma was always cutting up her pants and shirts way before distressed jeans and other clothing became popular. Irma was a great cook too. She paid attention to Mama Grice in the kitchen. One of her favorites of the family was tea cakes. As the saying goes, Irma could put her foot in some tea cakes. She was one of a kind with a happy spirit and a heart full of love for her family and friends. She departed this life on May 26, 2021, under hospice care. Irma leaves to cherish her memories, three sons, Roland Grice, Reginald (Beverly) Grice, and Vincent Grice; three grandchildren, Cynthia Grice, Nicholas Grice, and Nakkita Grice, six great-grandchildren, seven great- great-grandchildren; one sister, Sallye (George) Bowers; and two sisters-in-law, Pettye Jean "Bunch" Grice and Emma Boone Grice. Irma also leaves a host of nieces, nephews, and cousins who truly love her and will greatly miss her, especially at family gatherings and family reunion. She was preceded in death by her son, Gerald Grice; one grandson, Vernon Grice; and nine siblings, L.Q. Grice, Roberta White, L. V. Grice Sr., Minnie Arps, Allen Grice Jr., Luther Grice, Louis Grice Sr., Verna Jean Fields, and Effie Bearden.

The family of Erma Grice created this Life Tributes page to make it easy to share your memories.

Send flowers to the Grice family.