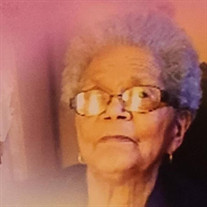 Ethelene Morgan Thompson was born June 6, 1925, in Water Valley, Mississippi, to Minnie Estelle and Solomon Wesley Morgan. She was the third child born to this union. She now joins her brother, Garner, and sisters, Lula Mae, Ernestine and Elsie, in heaven. Ethelene confessed her faith in Jesus Christ at an early age and became a member of First Concord Baptist Church in Batesville, Mississippi. After moving to Memphis, she joined Olivet Missionary Baptist Church until she heard the Lord’s call to join Bloomfield Missionary Baptist Church under the leadership of Rev. Wesley. Though she served under multiple pastors during her membership, she had a special love for her pastor, Rev. Ralph White, who preceded her in death. She often mused at how he “Sho could preach a fune!” She served as a faithful member of the church and kitchen committee until her health would no longer allow her to serve. In 1945, Ethelene would be joined in matrimony with her lifetime mate, Willie Hargress Thompson. To this union, six beautiful daughters were born. Hargress preceded her in death after fifty-four years of marriage. Ethelene was one of a kind. She gave birth to six daughters but was the bonus mother helping to raise her nieces and nephews, especially Larry Morgan, many of her children’s friends, church members and anyone else who needed a listening ear. She was the best cook in the neighborhood, often hosting Sunday dinners open to anyone wanting a delicious meal. Holidays were always filled with the smells of her famous German Chocolate cakes, sweet potato pies, perfectly fried chicken, etc. She was the willing taxi driver, providing rides to anyone brave enough to ride in her myriad of station wagons and the infamous purple van. She was unfiltered. There was never a time anyone had to wonder what she thought about them because she offered her opinion, with or without solicitation. Most of all, she loved God and she loved her family. On July 19, 2021, God decided Ethelene was ready to join her loved ones who had gone on before her, so He called her home. Ethelene leaves to cherish her memory: six daughters, Zulastine Mitchell, Elsie Thompson (her primary caregiver), Minnie McDaniel (Arthur), Debra Thompson, Cheryl Myers (Lartee), and Elicia Moore (Delyntonius); her grandchildren, Terrence, Jocquell (Ron), Sandra, Jackie, Arthur Jr. (Sandra), Julia (Warren), Julius (Katherine), Xavier, Hargress, Adrianne, Duane, Ebonee, Kristen and Taylor; great-grandchildren, Jessica, Joey (Amy), Jocqueline (Malcolm), Meagan and Morgan. She also leaves two sisters-in-law, Ella Bea Thompson (Melvin) and Louise (Vernon). She will be missed by a host of great-great-grandchildren, three special cousins, Marvin, Ann & Phyllis, plus many more family members and friends. Mrs. Ethelene Morgan Thompson was preceded in death by her granddaughter, Karen.

Ethelene Morgan Thompson was born June 6, 1925, in Water Valley, Mississippi, to Minnie Estelle and Solomon Wesley Morgan. She was the third child born to this union. She now joins her brother, Garner, and sisters, Lula Mae, Ernestine and Elsie,... View Obituary & Service Information

The family of Ethelene Thompson created this Life Tributes page to make it easy to share your memories.

Send flowers to the Thompson family.