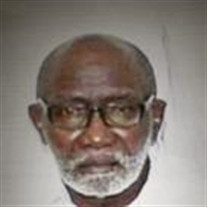 George Wright, Jr. was born December 28, 1944, the fifth of six children born to the late Della Lester Anderson and the late George Wright, Sr., in Looxahoma (Tate County) Mississippi. George moved from Mississippi to Memphis, Tennessee, as a young man and learned the trade of plumbing, a trade he loved and enjoyed until he retired from Bonds Plumbing in 2012. In this profession, he became a trainer and trained several apprentices who became plumbers. In December 1978 he united in holy matrimony to Stella Ware Wright, and to this union, three children were born and one united as a blended family. George joined East Trigg Baptist Church under the leadership of the late Dr. Hebert Brewster and served on the Usher Board until his health begin to fail. Dad, Daddy, Pawpaw, Grandpa, Big Bro, or Brother, as he was affectionately known by family and he was affectionately known by George, Mr. George or Old Man by friends. He leaves to cherish his memories for a lifetime: his devoted wife, Stella Ware Wright; three daughters, Shelia Wright of Grand Junction, Tennessee, Joy Hubbard of Memphis, Tennessee, and Vivian Wright Pyatt (Hank) of Cordova, Tennessee; one son, Elijah Wright “Baby Boy” of Memphis, Tennessee; nine grandchildren, four great-grandchildren; three sisters, Mildred Banks & Retha Williams of Toledo, Ohio, and Velvia Anderson of Memphis, Tennessee; one brother, Eddie Anderson of Memphis, Tennessee; and lifetime friends, Vicki Newsum-Hall “Lil Sis”, Floyd and Horace Newsum, Oscar “Sonny” Boggs, Shawn Moore and a special young man who entered his life in later years, George Boyd. He also leaves a host of nieces, nephews, cousins, other relatives and friends. Four sisters, Olivet Brown, Ethel Jacks, Mamie Anderson and Barbara Lester ,and one brother, Will Brady Wright, preceded him in death. What we have once enjoyed, deeply we can never lose All that we love deeply becomes a part of us. Celebrating the Life of George Wright, Jr.

The family of George Wright Jr. created this Life Tributes page to make it easy to share your memories.

Send flowers to the Wright family.