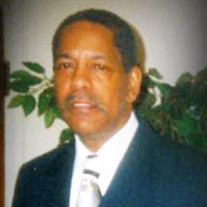 Gerald Hamilton Sr. was born in Memphis, Tennessee, October 19, 1952, to the late Homer Hamilton Sr., and Bernice Davis Hamilton. He was preceded in death by his parents and brothers, Dewitt Hamilton Sr., and Donald Hamilton. Gerald accepted Christ and was baptized at an early age at Southside Baptist Church pastored by Reverend Jimerson. He later united with Middle Baptist Church - Whitehaven pastored by Reverend Doctor Lester Basken. Gerald passed on Tuesday, November 16, 2021, at Methodist University Hospital, but his larger-than-life persona, and “direct to the point” trademark will never be forgotten. Gerald graduated from Mitchell High School in 1971. He was a commander in the ROTC and a member of the high school marching band where he played the alto saxophone. He was also a member of the ALWAYS BRAGGED ABOUT “Devonairs”. Gerald was employed by Firestone, Continental Tire, and later became an independent contract driver for FEDEX. To know Gerald was to love him; he was kind and would do anything for anyone. With a love and passion for grilling, Gerald was known as the “Master Griller”. Whenever he would barbecue or host a family gathering, the neighborhood would show up to eat. If you ever needed some sound, unfiltered advice on life, Gerald was the guy to talk with. Raw and unbiased as they come, Gerald was authentic, a straight shooter and he never sugarcoated anything. Gerald leaves his loving wife of forty-seven years, Sheron Basken Hamilton; two sons, Gerald Jr., and Jeremy Sr.; three grandchildren, Gerald III, Jeremy Jr., and Hailey; five brothers, Homer (Anita), Rodney Sr., Darrell Sr., (Erie), Vernon Sr., (Rebecca) and Mario; one sister, Michelle Cottrell (Elliott); six aunts, Josie Stewart, Ann Hamilton, Ruby Davis, Carrie Welch, Maggie Rodgers, and Naomi Jackson, and his beloved mother-in-law, Irene Basken. Gerald is survived by numerous nieces, nephews, and friends.

The family of Gerald Hamilton created this Life Tributes page to make it easy to share your memories.

Send flowers to the Hamilton family.