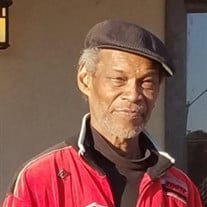 Henry Dennis “Chick” Miller was born June 28, 1953 to the late Leonia and Lee D. Miller, Jr in Memphis, Tennessee. Dennis was the 5th of 8 children to be born to this union. Dennis transitioned from this life on October 11, 2021. Dennis attended Florida and Riverview Elementary and Junior High Schools. He was a 1971 graduate of Carver High School. He was employed by the Memphis Army Depot in his earlier years. Dennis enjoyed “kicking it” with his family and friends (who affectionately called him “Chick”). He thoroughly enjoyed sports, playing football and baseball in his earlier years and then watching sports on TV and listening to it on the radio in his later years. Dennis was preceded in death by his third son, Demyrion Miller. He is survived by his daughter, Carletha Miller of Memphis, Tennessee and sons, Justin (Robyn) Nevile of Boston, Massachusetts, Jade Miller and Desmon Miller both of Memphis, Tennessee; and grandson, Peyton O’Shea Miller and granddaughter, Izabella Nevile. Siblings Delois Driver of Nashville, Tennessee, Lee D. Miller, III (Linda) of Memphis, Tennessee, Sandra Bussey (Eddie) of Macon, Georgia, Katherine Mapp (Jessie) of St. Louis, Missouri, William Miller of New Orleans, Louisiana, Charles Miller (Yolanda) and Rosalyn Williams both of Memphis, Tennessee and a host of nieces, nephews, cousins, and friends.

The family of Henry Dennis "Chick" Miller created this Life Tributes page to make it easy to share your memories.

Send flowers to the Miller family.