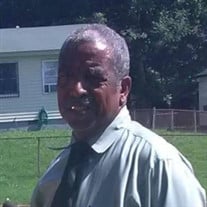 Horace Hughey was born December 13, 1956, in Estill Springs, Tennessee, to the late Willie and Jewell Hughey. Horace accepted Christ at an early age at Beulah Baptist Church. Horace attended Hillcrest High School where he graduated in 1975. After graduation, Horace held his first job at Walgreen’s where he was employed as a cook. He also worked at the airport and a few senior living homes. Horace later worked at The Memphis Jewish Home as a janitor where he was employed for many years before he retired. He was also employed at The Healing Cathedral Church as a janitor for many years until his recent departure. Horace Hughey was married to Mae Hughey, who he loved unconditionally. He was preceded in death by his daughter, Michella Henderson; two brothers, Walter Daniel Hughey and Ralph James Hughey. Horace leaves to cherish his memory: his wife, Mae (Wright) Hughey; three children, Kimberly Wright, Frederick Wright and Michael Upshaw (Brenda); ten grandchildren, eight great-grandchildren, three sisters, Joyce (Willie) Ivy & Shirley (Lloyd) Ormsby, both of Somerville, Tennessee, and Linda (Wayne) Johnson of Jackson, Mississippi; two brothers, Billy J. Jennie Hughey and Floyd (Carolyn Ann) Hughey of Memphis, Tennessee; a host of nieces, nephews, in-laws, cousins, other relatives and friends who he loved dearly, and his best friend, Anthony Jones.

The family of Horace W. Hughey created this Life Tributes page to make it easy to share your memories.

Send flowers to the Hughey family.