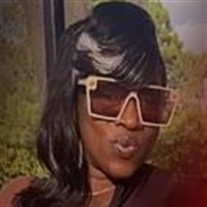 Not sure what to send?

Iesha Lynette Callicutt was born September 7, 1979, in Memphis, Tennessee, to Miranda Tuggle and Leroy Callicutt. She departed this life on Sunday, June 12, 2022, at the corner of South Lauderdale Street in Memphis, Tennessee. Iesha claimed a hope in Christ at an early age and was baptized at Living For Christ Church in Memphis, Tennessee. Iesha graduated from Westside High School/T-High in Memphis, Tennessee, where she was often the life of the party, keeping everyone smiling with her loving and warming personality. She had a big heart that you could not resist, and she also welcomed everyone and loved everybody in any way she could. She had multiple talents, but her biggest talent was being a mother and a grandmother. The majority of her time was spent cooking, cleaning and spending time with her family. Her daily routine consisted of taking a shower, having her coffee, calling her little sister, Punkin and her Auntie Ann, and making sure her household was good. Iesha lived for her kids and her family every day she woke up. No matter what, she put her kids and her grandkids before anything. She made sure everyone was good, family or not, she made sure you were good. She had a big heart even after experiencing tragic events back-to-back. Iesha leaves a family that loves and misses her dearly. She was preceded in death by her mother, Miranda Tuggle, and her father, Leroy Callicutt. She leaves her six children, Chamya, Anaya, Sade, Markecio, Delterio and Tamia; three grandchildren, Ramone, Ramiya, and Raylan; her only sister, Denesha; five brothers, Rickey, DeMarco, Brian, Lesean and Delterio; a host of aunts, Phyllis “Aunt Ann”, Aunt Sally Mae, Aunt Roberta, Aunt Irene, Aunt Cora, Aunt Annie, Aunt Denise, Aunt Helen and Aunt Dorothy C.; and a host of cousins, other family members and friends.

The family of Iesha Callicutt created this Life Tributes page to make it easy to share your memories.

Send flowers to the Callicutt family.