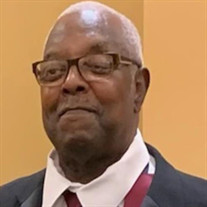 James Edward Phillips Sr. was born September 7, 1941, to Willie Frank Phillips Sr. and Josie Miller Phillips, in Walls, Mississippi. He went to sleep peacefully on March 25, 2022. James accepted Christ at an early age. He was baptized at Lakeview Baptist Church where he attended. Later, Mr. Phillips joined Unity Church of God in Christ, where he served for many years. He was employed at Specialty Packaging Group for over thirty years as a supervisor where he formed many lasting friendships. James attended and graduated from Delta View High School, Class of 1961. James, a man who loved and focused on family, soon met the woman with whom he would spend the next 55 years, Ruthie Brooks. James and Ruthie were married in 1966. During those 55 years of marriage, his legacy extended to create four children, Barbara Pegues (Greg Sr.), Catherine Phillips, Lisa Waters (John), and James Jr. His legacy was extended further with the addition of his grandchildren, whom he loved and adored, Gregory Jr., Brianna and Brian Pegues, Caitlin Walker, and Alayna Phillips. One of his primary beliefs is that family should protect and stick together. This belief was passed down to his children and grandchildren, who continue to uphold his values. He also leaves behind four siblings who will truly miss him, Lula Butler, Neurod Phillips (Eva), Arthur Phillips, and Irma Moore. He was preceded in death by his mother and father, brothers, Willie Frank, Willie B. Clayton, Dave, Peter, and Jeffrey, and two sisters, Barbara Ann and Annie Ruth. His love extended to his mother-in-law, Willie Mae Bobo; his many sisters-in-law, and brother-in-law. His devotion and love extended just as much to his host of nieces, nephews, and many friends who he adored.

The family of James E. Phillips Sr. created this Life Tributes page to make it easy to share your memories.

Send flowers to the Phillips family.