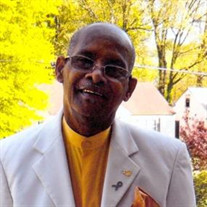 Rev. James Houston Karl Taylor was born June 12, 1936, as the eldest twin of three children to the late Mr. George Taylor and the late Mrs. Mary Viola Taylor. He was also preceded in death by his baby brother, Mr. George Taylor, Jr., and his son, Mr. Kenneth H. Taylor. Rev. Taylor was warmly known as "Amos" as a young lad. He attended Florida Street Elementary School, where he completed sixth grade. He accepted Jesus Christ at an early age, becoming a member of Mt. Zion Baptist Church. As a young adult, he dedicated his life to ministry, serving as an Elder at St. Joseph Spiritual Temple. While in ministerial training, he foiled an attempted robbery of a city bus in 1959. He convinced the young man to give him the gun and return the cash to the driver, leading the would-be robber to give his life to Christ through his witness of the Gospel. Rev. Taylor most recently was a member of Heaven Gates Ministry, organized by the United Fellowship of Churches. With an impeccable work ethic, Rev. Taylor worked first as a delivery boy for Hanson Engraving Company and King Furs in the '50s and '60s. He attended trade school to become a welder and successfully landed a job welding metals at the former Major Casket Company on Warford Street in North Memphis. He left the welding profession to become a baker and served as a foreman at Keathley's Bakery on Young Street in the Cooper-Young area of mid-town Memphis. He later joined Kroger Bakery on Florida Street in his South Memphis childhood community, where he retired. Recognizing that he was good with math and numbers, he started a small home-based tax business in 1968, partnering with Rev. Herbert Eddins. The company evolved into a family-based business where his wife worked alongside him, and in later years, his children and grandchildren joined the practice. Taylor Income Tax Service, which still operates today, grew from a partnership to a Limited Liability Company with five seasonal employees. It will continue its legacy of service to Memphis and the Mid-South. Rev. Taylor was a faithful neighbor, good friend, and a community leader. With a gift for embracing others, he never met a stranger and quickly made friends. He organized a neighborhood Boy Scouts' of America Troop. As Troop leader, he entered the scouts in the boxcar derby, and that year they won all the top honors for the fastest, most aerodynamic, sleekest race car of all. As a community advocate, he petitioned the local government to fill in a ditch that ran along Marjorie and Norfolk Streets to replace the old wooden bridge with modern streetscapes, curbs, and city lights. In recent years, Rev. Taylor helped re-establish the Hernando Terrace Neighborhood Association that planted flowers, picked up trash, and held neighborhood meetings. He graduated from the citizen police academy and recruited younger residents into the association. Rev. Taylor knew what it meant to be neighborly, for he looked after his elderly neighbors like the Williams and Neloms, making sure that they were eating daily and received dinner plates during the holidays. Each year, he would clean and cook more than 300 lbs. of chitterlings for his family while ensuring every neighbor who wanted a plate got one. Rev. Taylor was a loyal husband and provider. He married Katie M. Taylor after only one week of dating on May 3, 1956 - a union that lasted more than sixty-five years. He worked diligently to provide a good abode for the family, transforming the modest three-bedroom home in South Memphis to the “Taylor Compound,” as it is commonly called to host holiday gatherings for family, friends, and neighbors. Rev. Taylor leaves to cherish his memory his wife, Katie M. Taylor; his brother, Pete Taylor (Judy); an aunt, Lonnell Sargent; six sons, Robert I. Chalmers, Bishop Allen L. Chalmers, Sr. (Sharon), Antonio H. Taylor, Richard S. Taylor, Sr. (Valerie), Apostle David E. Taylor, and Chris "Rico" Taylor; four daughters, Sharon K. Taylor McKinney, Angela J. Taylor, Marilyn M. Robinson (James), and Zondra V. Taylor; twenty-five grandchildren, thirty-seven great-grandchildren, two great-great-grandchildren, and a host of nieces, nephews, cousins, extended family, and friends.

Rev. James Houston Karl Taylor was born June 12, 1936, as the eldest twin of three children to the late Mr. George Taylor and the late Mrs. Mary Viola Taylor. He was also preceded in death by his baby brother, Mr. George Taylor, Jr., and his... View Obituary & Service Information

The family of Rev. James Houston Karl Taylor created this Life Tributes page to make it easy to share your memories.

Send flowers to the Taylor family.