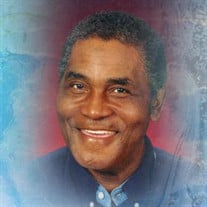 Not sure what to send?

Mr. Joe Louis White was born April 5, 1943, in Madison County (Canton), Mississippi, to Fed White and Stella Crawford-White; both parents preceded him in death. Joe confessed his life to Christ at an early age. He moved to Memphis, Tennessee, and later joined St. Augustine Catholic Church where he was a faithful member until his health failed. On November 22, 1997, Joe was united in holy matrimony to Clara L. Mitchner. God blessed him with two children and one grandchild. Joe was a loving husband, devoted father, and grandfather. Joe was employed by the City of Memphis Public Works Division where he was a devoted sanitation worker who was a part of the 1968 strike where he and many others marched alongside Dr. Martin Luther King, Jr. After nearly fifty years of service, he retired in 2012. On Monday morning before sunrise, June 13, 2022, at his home, Brother White peacefully departed this physical world. His earthly existence ended. God’s servant’s work was done. Now, he has gone to claim his reward. And though we will miss him, we will rejoice for he is with the Lord. To cherish his memory while rejoicing in his homegoing, he leaves: his loving wife, Clara L. Mitchner-White; two children – daughter, Robbie (Edward) Braxton and his son, Kevin Mitchner; and one grandson, Matthew Mitchner, all of Memphis, Tennessee; one sister, Lille Roberts of Camden, Mississippi; his uncle, Clemon White of California; one cousin he helped rear, Brianesha Bowdery of Memphis, Tennessee; two bonus sons, Bryan Bowdery and Lance Bowdery of Memphis, Tennessee; two bonus grandchildren, Kay’dence and Kyndle Bowdery of Memphis, Tennessee; numerous nieces, nephews, cousins, other relatives and friends; three special friends, Sara Gibson, James Mabry, and Onetha Sullivan. He was preceded in death by seven sisters and seven brothers.

Mr. Joe Louis White was born April 5, 1943, in Madison County (Canton), Mississippi, to Fed White and Stella Crawford-White; both parents preceded him in death. Joe confessed his life to Christ at an early age. He moved to Memphis, Tennessee,... View Obituary & Service Information

The family of Joe L. White created this Life Tributes page to make it easy to share your memories.

Send flowers to the White family.