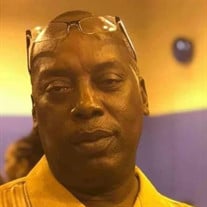 Mr. Kenneth Thomas was born June 13, 1963, in Memphis, Tennessee, to Joe Nathan Thomas, Sr., and Anna Thomas. He was the seventh of nine siblings. Kenneth acknowledged Christ at an early age and attended Mt. Pisgah Missionary Baptist Church. He attended Westwood High School and was a member of the Class of 1981 Alumni Association. After leaving high school, he attended truck driving school and received many licenses and certifications, which allowed him to drive local as well as out of state. He was also employed by BFI and Waste Management for numerous years. He later worked for Thompson Industrial until he was no longer able to work. On Sunday, March 21, 2021, Kenneth moved to his eternal home. He was preceded in death by his parents, Joe Nathan, Sr., and Anna Thomas; his sister, Bernice; and his brothers, Sonny, Joe, Jr., Charles, and John Wesley Thomas. Mr. Kenneth Thomas leaves to cherish his memories: his wife of ten years, Deborah Ann Thomas; his daughters, Conshundra Thomas and Taneshia Rockett; his sons, Quentine Dandridge, Cedric Thomas, Kenneth Thomas, Jr., Marcus Thomas, Riley Rockett, Jarvis Robinson (Isabella), and Lonnie Smith; twenty-two grandchildren, two sisters, Jessie Dawson and Diane Green Beasley (Wilbur); two brothers, Everett Thomas (Arthur Jane) and Reginald Thomas; his mother-in-law, Barbara McCray; sisters-in-law, Dolly Thomas, Sheryl Thomas, Ernestine Thomas, Kimberly Sanders (Nathan) and Evelyn Silas; brothers-in-law, Melvin Webb (Rose), Thurman McCray (Phyllis), and Floyd Williams (Erica); god-brother, Kelvin Lumpkin; aunts, Catherine Moss, Rosie Thomas, Dorothy Boyd, Carolyn Wilson (Edward) and Brenda Dunn. Kenny was a happy person who was full of jokes, pranks, and early phone calls to every number he knew. He enjoyed getting together with his family and friends. He also enjoyed spending time with his children and grandchildren, watching sports and sleeping after he had woke everyone else up. His favorite words were “Boo-Boo”, who was his wife. Kenneth’s memory will live on forever in his wife, children, grandchildren, siblings, and a host of other family members and friends who were blessed to have known him. Good-bye Kenny. Get your rest. We love you, but God loves you best.

The family of Kenneth Thomas created this Life Tributes page to make it easy to share your memories.

Send flowers to the Thomas family.