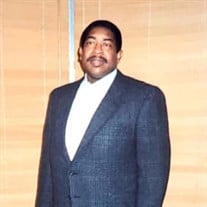 Larry Walker was born October 2, 1948, in Memphis, Tennessee, to the late Eddie Walker, Sr. and Annie Mae Walker. He grew up attending Oakville Baptist Church. Larry graduated from Capleville High School, Class of 1966, where he was well known. After high school Larry joined the United States Navy, where he fought in the Vietnam War. After service, Larry worked for Cleo Wrap and later Ford Motor Company for over thirty-five years until his retirement. Larry was an avid lover of sports, with the Memphis Tigers being one of his favorite teams. He enjoyed motorcycles, collecting antique samurai swords, seafood and cooking. Larry was deeply committed to family and always enjoyed family gatherings at his home. Larry was united in holy matrimony to Roxlyn Bentley on March 19, 1977; they were proud parents of two loving sons, Derrick and Justin Walker. Larry and Roxlyn resided in Memphis until his career with Ford relocated them to Atlanta, Georgia, in 1988. In November 2002, he returned to Memphis to work for Ford Motor Company Parts Division as a Claim Processor, where he was employed until his retirement. Larry resided in Olive Branch, Mississippi, after relocating from Atlanta, Georgia. Preceding him in death are his father, Eddie Walker, Sr.; his mother, Annie Mae Walker; his brothers, Eddie Walker, Jr. and Clyde Walker; and his sisters, Leatrice Harris and Ardaine Johnson. Mr. Larry Walker leaves to cherish his memories his wife, Roxlyn Walker; his daughters, Krystal Irby, Andrea Walker, Kimkea Harris, and Latoya Walker; his sons, Derrick Walker (Brigette) and Justin Walker; grandkids, Stephon, Dimitri, Malik, Aaliyah, Alexandria, Kaya, Jusira, Olivia and Asa; great-grandchildren, Ava and Andre`, who will miss him dearly; and a host of nieces, great-nieces, nephews, extended family and friends.

The family of Larry Walker created this Life Tributes page to make it easy to share your memories.

Send flowers to the Walker family.