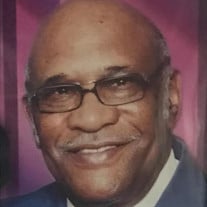 Reverend Doctor Lester Basken, known as “Nick”, was a beloved husband, a loyal family member, and a true friend to all. Lester Basken, born to Price and Elvira Basken on June 8, 1931, in Senatobia, Mississippi. Lester was the youngest of seven siblings, who all preceded him in death. He began his education at Halliburton School, which was an extension of his family church, Halliburton Missionary Baptist Church. The family stayed in Nesbit until they moved to Memphis in the early 1940s. In Memphis, he attended and graduated from Geeter High School, where he met the love of his life, Irene Jackson. Shortly after graduation, he was drafted into the Army and shipped to active combat duty in the Korean War where he was assigned to a Bazooka squad. On his 19th birthday, he was wounded in action. After recovery, Lester received an honorable discharge and the Bronze Star. Lester and Irene were married on August 14, 1953, shortly after his return to the States. He fulfilled his dreams of playing baseball with a local team called the Weaver Clowns. The infamous, Weaver Clowns had an opportunity to play against the legendary greats, Hank Aaron and Willie Mays. Lester was employed by Liberty Cash Foods, and National Food Stores. After leaving National Food Stores, he worked for Memphis Housing Authority and Shelby County Sheriff Department. After working nine years with MHA, the Lord reminded Lester of the promise that he made while he was injured in Korea. “Lord, if you let me live, I will do anything you want me to do.” Before accepting his call to preach, Lester was already active at his home church, Mount Pisgah, Weaver Rd. He was Choir Director, Sunday School Teacher, and the Superintendent of Sunday School. He was also the Choir Director of the Whitehaven District Choir, and a member of the J.W. Hardaway Singers. After preaching his first sermon on the third Sunday, in January 1971, Reverend Basken was called to pastor Middle Baptist Church the next week. Reverend Basken understood and realized the importance of education and he exemplified this by earning his Bachelor of Theology degree from Mid-South Theological Seminary, Doctor of Theology from Tennessee School of Religion, and an Honorary Doctorate from Lemoyne-Owen College. As pastor of Middle Baptist Church, he was instrumental in the building of a new sanctuary, education building, sanctuary renovations, family life center, and the purchase of additional land to expand the parking lots and future projects. Under his leadership the membership grew from 250 to over 4,000; and more than fifty young men accepted the call to preach the gospel under Reverend Basken tutelage. After 44 years of service, Reverend Basken retired from Middle Baptist Church. During his tenure, he also launched an annual summer youth employment program; initiated the Middle Baptist College Scholarship Fund; worked to expand the church’s philanthropic mission by assisting many higher educational institutions such as Lemoyne-Owen College. Mississippi Valley State University, Tennessee State University, Alcorn State University, Jackson State University, and Southwest Tennessee Community College. For twelve years, Reverend Basken served as Moderator of the Whitehaven District Association. He is the recipient of many honors and rewards. Pastor Basken is a national icon among preachers and pastors. Reverend Basken has been married to the lovely Irene Jackson for 68 years. They were blessed with four children, one son, Chrislyn Basken (Elizabeth), two daughters, Leslie M. Basken and Marilyn B. LeaVelle, who all preceded him in death. They have one surviving daughter, Sheron D. Hamilton (Gerald), Seven grandchildren, nine great-grandchildren, five sisters-in-law, and a host of nieces and nephews. Reverend’s Favorite Scripture: Psalm 27:1 The Lord is my Light and my Salvation, whom shall, I fear? Why, BECAUSE “The Lord is my Light.”

Reverend Doctor Lester Basken, known as &#8220;Nick&#8221;, was a beloved husband, a loyal family member, and a true friend to all. Lester Basken, born to Price and Elvira Basken on June 8, 1931, in Senatobia, Mississippi. Lester was the... View Obituary & Service Information

The family of Rev. Dr. Lester Basken created this Life Tributes page to make it easy to share your memories.

Reverend Doctor Lester Basken, known as “Nick”, was a beloved...

Send flowers to the Basken family.