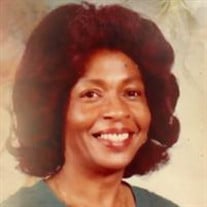 Lonnie H. Sargent was born November 3, 1930, in Memphis, Tennessee. She was cared for and loved by her father and mother, the late Mr. Lonnie B. and Mrs. Frankie P. Hardy; her grandmother, the late Ms. Julia Jones; and stepfather, the late Mr. Jessie Jones. She was the only girl of three brothers, the late Marion Hardy, the late Earnest Hardy, and the late George Taylor. Her late nephew, James H. K. Taylor, also preceded her in death. Lonnie was a member of the Mt. Zion Missionary Baptist Church, where she found Jesus Christ early. She attended Florida Street Elementary School and later graduated from Booker T. Washington High School. Lonnie went on to attend LeMoyne Owen College to pursue a degree in the field of Education. She graduated from LeMoyne-Owen College in 1951 with a teaching degree. She began her illustrious career with Memphis City Schools, where she served for more than forty years, teaching sixth grade at Hamilton Elementary School. Lonnie received many awards and recognitions during her career. Although she enjoyed what she did, for teaching was her passion, the time came when she started another phase in life; she retired on August 14, 1998. Lonnie was united in holy matrimony to the late Minus Lee Sargent, and to this union was born a son, David Sargent. A woman of strength and character, she found comfort in her faith and family following the loss of her husband in 1969 after only four years of marriage. However, she continued her life with integrity and loving care for her son, family, friends, and students, who energized her with passion and purpose even to the ripe precious age of ninety-one. On February 8, 2022, her Lord and Savior called her home to eternity. She leaves to mourn her passing, her son, David Sargent; nephew, Pete Taylor (Judy); first cousin, Wade Hardy (Joy); great-nieces, great-nephews, loving relatives, friends, and students who will always cherish her memory.

The family of Lonnie Sargent created this Life Tributes page to make it easy to share your memories.

Send flowers to the Sargent family.