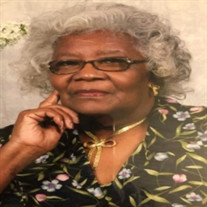 One of the sweetest souls to ever live on this earth entered into heavenly rest when Mother Mary Ella Jeffrey Huggins went in rejoicing and receiving her spiritual reward for her earthly deeds being well done, as she slept peacefully away on Sunday morning, October 31, 2021. Mary Ella was the last baby girl born with her twin sister, Lou Della, on March 15, 1934, to Andrew and Emma Jeffrey in Wynne, Arkansas. She attended and graduated from Childress High School in 1954 in Wynne, Arkansas. After graduating, she spent four years working on her family’s 80-acre farm before deciding to move to Memphis, Tennessee, in 1958. It was while living here throughout her life, she became Big Momma, Momma Mary, Mrs. Mary, and Mother Huggins. Sister Mary Ella’s journey with Jesus started early in life. She could be heard testifying many times of how she and her sisters were saved, sanctified, and filled with the Holy Ghost in their home church, Jones Temple Church of God in Christ, in Wynne, Arkansas. This journey continued in Memphis, Tennessee, and she labored faithfully in God’s vineyard. For several years, she served at the Tree of Life Church. She loved working with the children as Day Camp Counselor and Summer Vocational Bible Study Leader. Her diligence and integrity led her to becoming not just a member, but also, the president of the Mother Board, church secretary, and church treasurer. The last fifteen years, Mother Huggins has been under the leadership of Pastor Alfonzo Boone and Pastor Ahmad Jones at Breakthrough Church of God by Faith where she has continued to serve dutifully on the Mother Board and with the church Clothes Closet and Food Ministry. She also served as an officer of the Church of God by Faith National Mother Board Congress Meetings. Big Momma worked diligently in the church, in the community, and in her home serving others. Her love for children also led her to work as a surgical technician at LeBonheur Children’s Hospital for thirty-two years. In recent years, she was blessed to do something else she loved - sewing. If you go to the Hampton Inn in downtown Memphis, you will see her special touches throughout the hotel. The workers are adorned in uniforms sewn by her hands, and the windows are beautifully decorated with draperies made by her. Everyone who sleeps there is comforted in warmth covered by Mrs. Mary’s comforters. She was hired as the seamstress for the Hampton Inn for twenty years, from 2000 - 2020. In her home, being such a sweet, loving, and kind soul, she did not demand respect, but her spirit commanded so much love and the utmost respect by everyone. She lived her mission through her abundant giving. Her home became a Safe Haven filled with love for countless numbers of people for shelter, clothing, food, prayer, bible study, Godly words of wisdom, and much more. She was even honored to have men and women of God to eat and reside in her home. Preceding her in death are her parents, Andrew and Emma Jeffrey; her husband, James Huggins; her three brothers, William, Johnnie, and Clarence Jeffrey; her three sisters, Dorothy Lee Jeffrey, Lou Della Cannon, and Essie Mae Long; and her granddaughter, Marian Jeffrey. Remembering sweet memories and forever holding her in our hearts are her children, Lou Emma (Elliott) Jackson of Little Rock, Arkansas, Vonda Kaye (Patrick) Clark of Atlanta, Georgia, Vertonia (Robert West) Jeffrey and Willie Jeffrey of Memphis, Tennessee, and Vera (Danny) Smith of Atlanta, Georgia; her adopted son, Daniel Hunt of Memphis, Tennessee; ten grandchildren, Kimberly (Elijah) Jones, Torlisa Jeffrey, Shanice Clark, Jarrin Jeffrey, Tiera Clark, Elliott Jackson, Jr., Shelbi Jeffrey, Evan Jackson, Tyrone Jackson, and Pashun Jackson; eight great-grandchildren including her very special first born one, Amirah Jones; and a host of nephews, nieces, cousins, adopted children, adopted grandchildren and friends. Her memories will also be cherished and remembered especially by her lifelong friend, “Lil Sister” Mother Josephine Patterson and her niece/daughter and nephew/son, Terri Ann and Reginald Everett. Big Momma touched so many lives. For all of us, life will never be the same. We were blessed to have her for so many years. Sleep on, take your rest, and wear your crown Big Momma, Momma Mary, Mrs. Mary, Mother Huggins, Mary Ella Jeffrey Huggins.

One of the sweetest souls to ever live on this earth entered into heavenly rest when Mother Mary Ella Jeffrey Huggins went in rejoicing and receiving her spiritual reward for her earthly deeds being well done, as she slept peacefully away on... View Obituary & Service Information

The family of Mary E. Jeffrey-Huggins created this Life Tributes page to make it easy to share your memories.

One of the sweetest souls to ever live on this earth entered...

Send flowers to the Jeffrey-Huggins family.