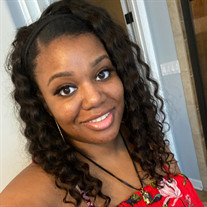 Natasha Danielle McCaster Williams, also known as "Tasha Berry," was born in Memphis, Tennessee, on September 12, 1984, to Rev. Alford Lee McCaster and Darlene Blocker-McCaster. Natasha accepted Jesus Christ as her Lord and Savior at an early age. She was baptized and became a member of New Zion Missionary Baptist Church under the late Pastor Larry Eddins. She served in the Youth Choir Ministry. Natasha was a very strong and brilliant young lady. She was a graduate of Central High School in Memphis, Tennessee, Class of 2002. She attended the University of Tennessee at Martin in Martin, Tennessee, UT Medical and Rush University. While furthering her education, she worked diligently and obtained a Bachelor's Degree and a Master's Degree in Science. She maintained a 4.0 Grade Point Average. Natasha went on to become a Blood Technician with Methodist University Hospital. She later advanced her career by becoming a Supervisor with Regional One Health. She was later promoted to Manager of Transfusion Services. She was the loving mother of three beautiful children, Kylan Warren, Brennon Williams and Arriana Williams. Her children were her pride and joy. Natasha loved the Lord, her children, her family and friends. She was also, "A Daddy's Girl." She enjoyed helping others. Her spirit and smile were contagious. She remained faithful with her trust in God even while she was ill. Natasha leaves behind two sons, Kylan Warren and Brennon Williams; one daughter, Arriana Williams; her parents, Rev. Alford and Darlene McCaster; two brothers, Alford Deondre (Crystal) McCaster and Derek (Markesha) McCaster; her maternal grandmother, Bobbie Olive; four nieces, five nephews, a host of aunts, uncles, and cousins, and a special friend, LeAndrew Davis.

The family of Natasha Danielle McCaster-Williams created this Life Tributes page to make it easy to share your memories.

Send flowers to the McCaster-Williams family.