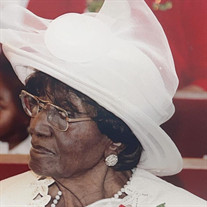 Mandy Omegia Harris Nelson was born on October 5, 1927, to the late Rev. Elias Harris and Della Allean Butler Harris. She was the seventh of eleven children. She accepted Christ at the age of 8 years old at Springhill Baptist Church in Ruston, Louisiana. She continued her Christian journey by founding the Harris Gospel Singers along with four of her siblings. The group went on to sing in churches throughout Arkansas, Mississippi, and Louisiana. She later united with the Love Chapel Baptist Church where she continued being an active member. After moving to Memphis, she became a long-time member of Greater Middle Baptist Church. Her love for Jesus was exemplified through her great service in the church. Ministry members recount her warm hospitality luring them to sleep on her chaise lounge by the window after planning events. For more than 25 years, she was an active member of the Mother’s Board, the Board of Trustees, and the Francis Dancy Hooks Court of Calanthe. She was also one of the George Eddings class Sunday school teachers, a coordinator of the Mid-Week service, as well as a Board member for the Hooks Dimmick Child Care Group. Mother Nelson helped found church events such as the Mother’s Board Women of the Bible pageant and the Mother-Daughter Tea. Whenever the church doors opened, you would find her there! Omegia graduated from Lincoln High School in 1948 and went on to attend and graduate from Grambling College (now Grambling State University) with a Bachelor of Science degree in Elementary Education. She completed further studies at Louisiana Tech University, Northeast University (now the University of Louisiana at Monroe), Alcorn University, and the University of Tennessee at Martin. She taught for more than 35 years. Her teaching career began in Beulah, MS where she taught children during the day and adults at night. The adults were sharecroppers on local farms and many were only a few years younger than herself. She would often tell stories of how she and fellow teachers would have to briefly leave town because of harassment from KKK members. After leaving Mississippi, she and her sister Mae D. taught in Franklin Parrish where Omegia taught middle school at Winnsboro Junior High School. After retiring in 1987, she moved to Memphis and continued to utilize her educational gifts by volunteering at Bethel Grove Elementary and tutoring students in her neighborhood. While her teaching career began during the unrest of the Civil Rights Movement, her life ended during the national unrest of Black Lives Matter. For many years, Omegia and her sister Mae D. raised their children and nieces-Joyce, Gail, Annjeanet, and Za-at 1110 Blanson Street in Winnsboro, Louisiana. She would often mention her time there while reminding her grandchildren to always get on their knees and pray before bed. This was a family ritual that carried on into the adult lives of the children. In 1961, she married Jonas Nelson Jr. and her only child, Joyce, was born to their union. While she resided in Mississippi or Louisiana during the school year, she spent summers in Memphis with her husband. They enjoyed cooking together and joy rides through the city a neighboring areas. When she returned to Memphis, she cared for him through an illness until his death in 1990. While at home, you could often find Omegia tending to her vegetable and flower gardens or sitting on her front porch on watch as the unofficial neighborhood watch captain (because she saw everything)! When she became a grandmother, her greatest joy was keeping her grandchildren and telling them stories of her childhood and experiences teaching in the South during the Jim Crow era and growing up in a large family. She was an amazing storyteller. One of her favorite pastimes was talking on the phone to her family and friends. She was known in her neighborhood for her excellent cooking and sassy storytelling. Her house became a safe haven for children in the neighborhood. Omegia is survived by her daughter Joyce Nelson Taylor (Steve Taylor) and her grandchildren Raven Taylor, Brandon Taylor, and Jacob Taylor. She also leaves two sisters Bethany Williams and Ethel Palmore of Ruston, Louisiana, two brothers Felix Harris (Mary Helen) of Los Angeles, California, and Melvin Harris (Wilnora) of Ruston, Louisiana and a host of loving family and friends to cherish her memory. Six siblings-Bertha Williams, Mattie Mae Harris Thompson, Flemon Harris, Rev. David Harris, Mae D. Harris, and Hazel Harris Gipson-Hill preceded her in death. She entered eternal peace on April 28, 2021, at her daughter’s home in Memphis, TN.

Mandy Omegia Harris Nelson was born on October 5, 1927, to the late Rev. Elias Harris and Della Allean Butler Harris. She was the seventh of eleven children. She accepted Christ at the age of 8 years old at Springhill Baptist Church in Ruston,... View Obituary & Service Information

The family of Omegia Nelson created this Life Tributes page to make it easy to share your memories.

Send flowers to the Nelson family.