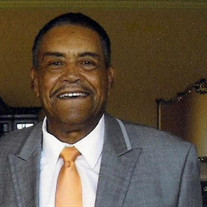 Remembering the Man” God knew Percy Lee Jones’ earthly life would end on Memorial Day, May 30, 2022, seventy-five years after He blessed his mom, Willie Ann Jones and his dad, Wallace Jones with such a curious and special young man. Both parents preceded him in transitioning. The most important decision Percy made was accepting Christ as his personal Savior at Third Mount Olive Baptist Church in West Point, Mississippi. There he sang in the choir and served on the Usher Board. His quiet humble way of serving God by serving others began. Percy graduated from Fifth Street High School where he was a drummer in the band. After graduating from high school, he enlisted in the United States Air Force, served in Vietnam, and was honorably discharged in 1968 as Sergeant. After returning to West Point, he was employed with Bryan Brothers Packing Company and B & W Steel Company. After a random encounter at a local department store, he met someone from his past, someone with whom he would be spending the next fifty-plus years, his wife, Barbara Gunn. This union was blessed with two beautiful, unique children, Charles and LaKesha. Percy moved his family to Memphis and shortly afterwards united with the Middle Baptist Whitehaven Church family. He was active in Sunday School, Mass Choir, Male Chorus, and the Men's Ministry until his health slowly started to decline. He gained employment at CBI Nuclear Company and upon its closing, he was employed with MLG&W until his retirement on February 12, 2011. Percy's life will be cherished and remembered by his wife, Barbara Gunn Jones; his two children, Pastor Charles A. Jones (Taryn), Hoover, Alabama, and LaKesha Jones Herron (Matthew), Olive Branch, Mississippi; and the seven grandchildren who always knew granddaddy had their backs include Tyara, C.J., Skvlar, Kaiah, Lyle, Mattalyn and Mathew. He also leaves behind three sisters, three brothers-in-law, one uncle, and a host of nieces, nephews, other relatives, friends, and many who called him daddy and grandaddy. Percy L. Jones' Message to All: “I have fought a good fight, I have finished the race, and I have remained faithful, and now the prize awaits me...” II Timothy 4:7-8

Remembering the Man&#8221; God knew Percy Lee Jones&#8217; earthly life would end on Memorial Day, May 30, 2022, seventy-five years after He blessed his mom, Willie Ann Jones and his dad, Wallace Jones with such a curious and special young... View Obituary & Service Information

The family of Percy L. Jones created this Life Tributes page to make it easy to share your memories.

Send flowers to the Jones family.