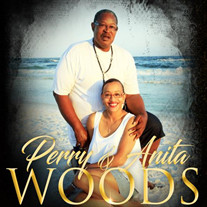 Mr. Perry King Woods was born July 28, 1957, to the late Earl Douglas Woods Sr. and James Earline Woods. He entered into eternal rest and peace on Sunday, April 3, 2022. Perry, sometimes referred to as "Big P" by family and friends, accepted Christ at an early age at Bloomfield Baptist Church under the leadership of Reverend L. S. Biles. Perry later re-dedicated his life to Christ under Pastor Ralph White. It was under the teaching and leadership of Pastor Ralph White that Perry married his wife, Ms. Anita Sloan, who also then became a member of Bloomfield Baptist Church. Perry graduated from Southside High School in Memphis, Tennessee. Perry went on to attend school for electronics and was one of the best TV repairmen in the business. He later worked at Vanguard Manufacturing, specializing in Ornamental Iron Doors where hard work had him promoted to supervisor. Once again, Perry mastered the job and excelled. However, after a back injury on the job and several surgeries, he became disabled. Despite his disability, Perry made himself available to his family. He assisted in the care of his brother-in-law, Darrell, for many years. Perry was always helping family in any way he could, while keeping you laughing the entire time! As God would have it, Perry and his wife, Anita, were summoned by the Lord and went to be with the Lord together on the same day. Perry leaves to cherish his memory, three daughters, Pamela Burchett-Woods, Erica Lynn Lee, and Mariah Shanice Lee; six grandchildren, Morris C. Brown III, Jamaya Hill, Lauryn Hill, Paige Burnett, Mason Erich Gentry, and Erin Zuri Herrington; his siblings, Fannie Woods, Marilyn Catron, Earnestine (Darrell) Hollimon and Earl Jr. (Lula); and a host of aunts, uncles, cousins, nieces, nephews (whom he adored), other family members and friends. Perry was preceded in death by his daughter, Shannon Hill; brothers, Curtis Woods and Quinton Woods and brother-in-law, Jessie Catron Jr.

The family of Perry King Woods created this Life Tributes page to make it easy to share your memories.

Send flowers to the Woods family.