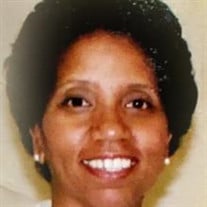 Lady Rhonda L. Munn-Banks was born on June 25, 1953, in Millington, Tennessee, to the late Mr. Roy Munn Sr. and the present Mother Norma A. Williams. On March 4, 2022 at 1:30, Lady Rhonda L. Munn-Banks, affectionately known to her husband as “Baby Cakes” completed her life’s journey with her family close by her side. As a child, she was quiet and obedient to her parents. She possessed an humble spirit but had a curious, creative and inventive mind. She attended, as a child, Cummings Elementary School, Lincoln Junior High School and graduated from Southside High School, Memphis, Tennessee. She later went on to earn a degree in accounting and finance at State Technical Institute of Memphis (now Southwest Tennessee Community College, Memphis, Tennessee). After college, she was employed by the United States Postal Service. She was also involved with her husband on the political scene where she served as an executive board member with the Shelby County Democratic Party and served as a board member with the Shelby County Democratic Club. She also served as a deputy registrar in Memphis and Shelby County. She was honored with many certificates from the State Senate, from the State House of Tennessee, and also on the local level of Memphis and Shelby County for her works in the political parties. She supported the ministry with her mother and aunts at Bethel AME Church of Memphis until the Lord’s Spirit sent her to Pure Holiness Institutional Church of God in Christ, Memphis, Tennessee, where she served faithfully as church secretary and as the pastor’s wife until her death. She will be missed. Lady Rhonda L. Munn-Banks leaves to mourn her passing: her husband, Pastor Dr. M. Everett Banks; three children, Leslie Camille (Dr. Christopher Dale) Anderson of Marietta, Georgia, and Michaela ReShea Banks & Trevor Johnson Banks of Memphis, Tennessee; two brothers, Mr. Roy Munn Jr. and Mr. Spencer D. Williams II of Memphis, Tennessee; her mother, Ms. Norma A. Williams of Memphis, Tennessee; her mother-in-law, Ms. Rosie M. Knight of Millington, Tennessee; her last surviving aunt, Ms. Sandra Gayle Alexander of Memphis, Tennessee; two grandchildren, Master Gibson Riddick Anderson of Marietta, Georgia, and Master Micah Elijah Nolen of Memphis, Tennessee; a host of nieces, nephews, and friends, the Old Hickory Hills Neighborhood Association family and the Pure Holiness Institutional Church of God In Christ family.

The family of Rhonda Munn-Banks created this Life Tributes page to make it easy to share your memories.

Send flowers to the Munn-Banks family.