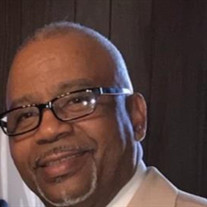 Robert Lee Threlkeld, Jr. was born July 14, 1958 in Memphis, Tennessee to the late Robert Lee Williams and Odessa Threlkeld-Smith. Robert Jr. is survived by his lovely wife of 40 years, Angela “Queen” Threlkeld; his three sons, Robert Tony Threlkeld, Marcus Threlkeld-Carter, and Nicholas Threlkeld; his mother, Odessa Threlkeld-Smith; his three brothers, Eddie Threlkeld (Carolyn Threlkeld), James Threlkeld, Otis Threlkeld, Sr. (Cathy Matthews); his three sisters Diane Threlkeld, Donna Yates (Jerome Yates), and Robin Middleton-Threlkeld; two half-sisters, Virginia Biggs and Faye Hall (Robert Hall); and his 8 grandchildren along with a host of nieces, nephews, cousins, and god-brothers/sisters. Robert Jr. was preceded in death by his father Robert Lee, Sr., son Mario Hampton, brother Anthony Lavell Threlkeld, nephews Hosea Danyel Threlkeld and Damon Matthews. Robert Jr. accepted Christ and was baptized at an early age at Little John Baptist Church in Millington, TN. As a young man, he had a heart the size of the ocean and was always committed to helping anyone in need. He attended Millington Central High School where he excelled at basketball, baseball and track & field. In 1982, Robert united in holy matrimony to his wife, Angela Threlkeld. Their union was truly blessed by God as it brought countless joy to others over their 40 years of marriage. They joined Oak Grove Missionary Baptist Church in 1992 and Robert served faithfully in the Male Chorus, Men’s Ministry, and more recently, Usher Ministry under the leadership of Pastor Donald L. Johnson. Known for always having an undeniable smile with a matching tool belt, Robert devoted himself to being the “church handyman.” He was truly a servant leader! His favorite sport was basketball and he is best known for saying “HAPPY BIRTHDAY” whenever he made a deep 3-point shot. This was his way of bringing extra joy to the game of basketball. He was a retired employee of Sharp Electronics for over 30 years where he was an expert mechanical engineer. More recently, he worked for Mauser Packaging in a similar role. Robert was a jack of all trades and nothing was ever too hard for him. He always said, “Don’t run from challenges [son], embrace them because the experience will only make you stronger.” Out of all the things Robert Jr. had achieved throughout his life, being a loving husband, father, grandfather, brother, son, and uncle was his favorite. Nothing meant more to him than spending time with family and loved ones. He also had a passion for painting and remodeling. As a master craftsman, Robert spent much of his time volunteering services to help others remodel their homes and businesses. With such a caring and giving spirit, he was always that ray of sunshine in any situation. Robert Jr. spent his final hours expressing his endless love to his wife and family.

The family of Robert Lee Threlkeld Jr. created this Life Tributes page to make it easy to share your memories.

Send flowers to the Threlkeld family.