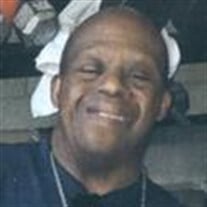 Thomas Edward Brown was born September 3, 1955, to the late Robert and Prenia Brown. Thomas attended LaRose School. He accepted Christ as his Savior at Holy Temple Ministries under Pastor Michael German. Thomas, affectionately called “Tome” enjoyed singing and dancing, especially if it were Michael Jackson or James Brown. He loved the simple life and was content while cooking, cleaning, coloring and clipping coupons. You could find him on Monday or Friday nights watching his favorite television program, WWE SMACK DOWN. Thomas lived with his niece, Geraldine Ewell, and family in Jackson, Tennessee, from 2013 – 2020. The Ewells, including Riley, continued to provide tender love and care for Thomas. During his time there, he made many friends at school, church and in the community. He moved to Robbins, Illinois, in August 2020 to live with his brother, Prentiss. Thomas’ memories will live on in his two brothers, Bishop G. W. Brown (Juanita) and Prentiss (Michelle); six sisters, Siney, Earnestine, Ophelia, Annie, Cornelious and Josephine; and a host of nieces, nephews, other relatives and friends. Thomas was preceded in death by his parents, three sisters, Ester, Leatha and Betty; and three brothers, Amos, Robert, Jr., and J.T.

The family of Thomas Edward Brown created this Life Tributes page to make it easy to share your memories.