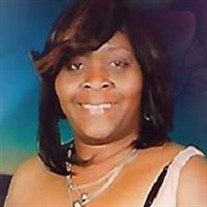 Tyra LaShandra Woods was born March 13, 1973, in Memphis, Tennessee, to William H. Woods Sr. and Linda Faye Morgan. She was baptized at an early age at Temple of Deliverance Church of God in Christ under the leadership of the late Bishop G.E. Patterson. Tyra graduated from Whitehaven High School in 1990 with studies focused on Cosmetology and R.O.T.C. Tyra held many jobs, as she believed in working and supporting herself. There wasn’t anything she wouldn’t do or couldn’t do and excelled at it. Tyra’s passion was her family. Even though she didn’t have any children of her own, she quickly adopted yours and it was instant, unconditional love for your child. She had more children than the old lady in the shoe. Tyra had many, many names. Whether she was called Tee, T-Baby, Big Baby, Big Sexy, Momma, Auntie Tyra, or Friend, she was loved by so many and gave love so freely; she will be missed by so many more. Tyra had one of the most infectious smiles; no one could resist. You tell her no; she looks at you with those rolling eyes, gives you that smile, and eventually gets what she wants. She was the life of the party. She could make you laugh and cry at the same time. She was everybody’s BIG BABY. Tyra leaves to cherish her memories; her mother, Linda Morgan-Woods; her father, William H. Woods, Sr. (Dorothy); two brothers, William H. Woods, II (Kim) and Darren Robinson, all of Memphis, Tennessee; one sister, Jackie Martin (Vincent); two aunts, Dorothy Morgan-Brent (Tyrone) and Gail R. Smith; five uncles, Esker Bobo (Alberta), Jesse Morgan (Tena), Overton D. Wright, Sr. (Carolyn); Jerry L. Woods Sr. and Terry Woods; her god-mother, Barbara Woods; and god-daughter, Treasure Smith, all of Memphis, Tennessee; numerous nephews, cousins, great-aunts, great-uncles, god-sisters, god-brothers, god-children and many, many friends.

Tyra LaShandra Woods was born March 13, 1973, in Memphis, Tennessee, to William H. Woods Sr. and Linda Faye Morgan. She was baptized at an early age at Temple of Deliverance Church of God in Christ under the leadership of the late Bishop G.E.... View Obituary & Service Information

The family of Tyra LaShandra Woods created this Life Tributes page to make it easy to share your memories.

Send flowers to the Woods family.