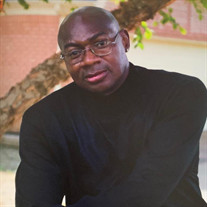 Victor Williams was born November 10, 1961 in Memphis TN, to Norma Craig and the late Leroy Mackey. He confessed his faith in Christ and was baptized at Oak Grove M.B. Church under the leadership of Pastor Donald L. Johnson where he served on... View Obituary & Service Information

The family of Victor Williams created this Life Tributes page to make it easy to share your memories.

Send flowers to the Williams family.