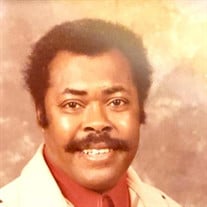 William O’Bannon, Jr. (fondly called OB) was born January 22, 1929, in Holly Springs, Mississippi, to Ophelia Cowan O’Bannon and William O’Bannon, Sr. He later moved to East Chicago, Indiana, before joining the U.S. Navy, where he served a tour of duty and subsequently worked on various government jobs in Memphis, Tennessee. William was a man of many trades that included having been a licensed cosmetologist. Later in life he drove a school bus, transporting children to and from a daycare center. Over the years, he befriended many people; most of whom predeceased him. OB was known for his kindness and for being a gentle man. He was widowed in 2005 when his wife, since 1987, Gloria Green O’Bannon, was laid to rest. William had three children, six grandchildren and seven great-grandchildren. His children were Janet O’Bannon Mitchell, Paul O’Bannon (deceased) and Debra O’Bannon Maxwell. He leaves three siblings, Wilbert Watkins of Arizona, Maurice Watkins of Texas, and Brenda Watkins Walker of East Chicago, Indiana (Calumet Community). The sun set for OB on February 16, 2021, and he transcended to his new home for a life with new beginnings. Although we miss him, we celebrate his homegoing!

The family of William Obannon Jr. created this Life Tributes page to make it easy to share your memories.

Send flowers to the Obannon family.